They could have spent the summer travelling. Or lying on the beach, or chilling out. Instead, these high school kids devoted part of their summer to solving challenging math or physics problems. 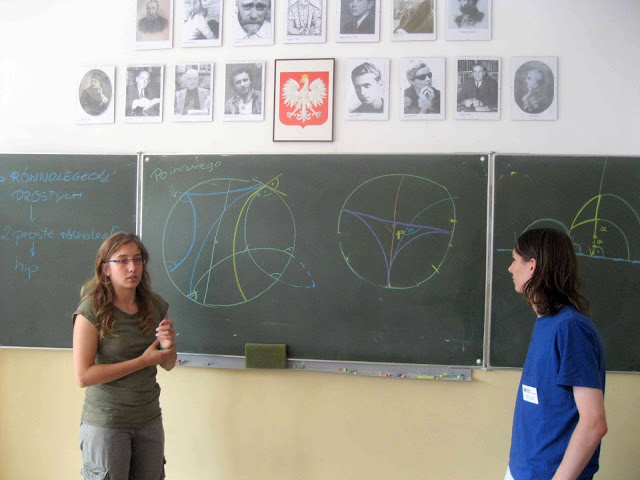 Now their gaze is fixed on the screen, tracking line after line of code. In another room, chalk clatters against the blackboard as problems are solved and theorems proved. In the corridor, a conversation has just shifted from computation theory to the nature of consciousness. It's well past midnight, but nobody is going to sleep yet.

As co-organizers, we would like to share some personal thoughts about the event. Some of them are relevant to education of highly gifted students, other are more universal. We outline:

This is the first part of a longer text about SSS. In the second part, The Nuts & Bolts of SSS, we will describe in much more detail how different aspects of the camp (qualifying participants, preparing a good course, planning social activities) are organized and why it works.

SSS started in 2006 as a completely informal summer meetup of friends eager to share their passion for science and learn from one another. Back then, the oldest of us were just about to start studies at university - so it was just high school kids giving talks and lectures to each other. 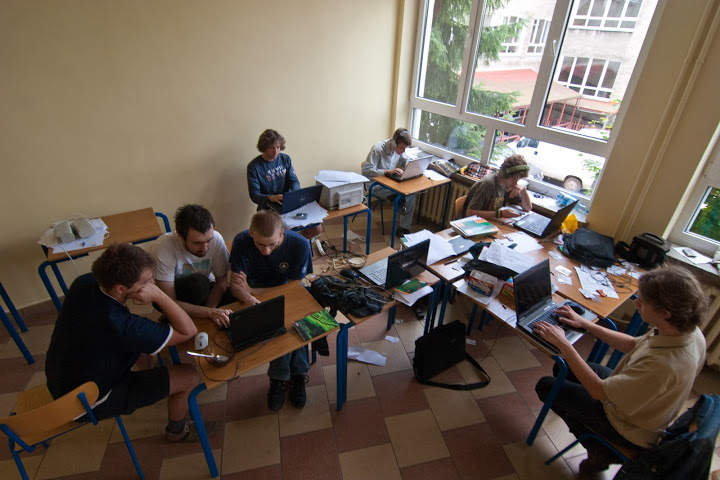 We enjoyed the result so much that we organized another camp the next year. Over time, the concept took a more organized form, evolving from a small casual meeting to a (still informal) summer camp accommodating about 35 high school students and a dozen of tutors, mostly undergrads. The camp itself has always been independent of any educational institution or NGO, although since 2010 we have had partial financial support from the University of Warsaw.

The bulk of the camp consists of about 20 advanced courses in mathematics, physics and computer science (both theory and programming), from which participants can choose up to six. Each course, typically lasting 9 hours over 3 days, is taught by an undergraduate tutor and aims at exposing participants to a university-level topic. To give some taste of our "menu", example topics include:

We opt for topics not emphasized even in standard university curriculum, with as much "hands-on" approach as possible. For example, in a Natural Language Processing course participants would start by installing and mastering required software and then write a simple parser; in Knot Theory, they would prove by themselves basic theorems about knot invariants; in Polarization of Light they would take optical measurements.

The focus is not only on conveying "hardcore" academic knowledge, but also on broadening horizons. There’s a lot going on outside the courses - evening talks about topics such as interactive art, narrative thinking or roguelike games, a workshop in lock picking, PowerPoint karaoke and 5-minute lightning talks on anything from juggling to free will and time travel. One could even play Rock-Paper-Scissors with a special-purpose robot built by one of participants (featured in one of the pictures - beware, the robot is unbeatable!).

When a critical mass of nerds is brought together, there’s a flurry of ideas that spills outside the formal schedule. Evenings are filled with various activities, including engaging conversations, board and RPG games, hacking, coding… In our opinion, the density of smart and like-minded people at SSS is unusual even compared to math university departments. Overall, the event is a crossover of a "scientific camp" and, in words of one of the participants, "an elite nerd meetup".

Why we do it

Our motives are twofold. First, it’s simply a great pleasure to teach students who are really smart and passionate - and we can learn from them as well. Second, we believe that the camp is needed and fulfills a valuable function. Lots of bright kids, especially from smaller towns and villages, have no one to talk to about academic level science or their nonstandard interests. With a few exceptions, the Polish educational system is at best mediocre at picking out and nurturing talent (as far as we know, it’s no better in other countries - please let us know if we’re wrong). Fortunately, for over 30 years, a wonderful NGO, the Polish Children's Fund, has been patching up this hole, organizing workshops and camps for extraordinarily talented children, providing support and connecting them to the academic world, helping them develop their intellectual potential and connect with like-minded peers. Still, the program cannot reach everyone and there is need for more initiatives aimed at nurturing talented children. Apart from the Polish Children's Fund's workshops, and more contest-oriented initiatives (e.g. math olympiad preparation camps), SSS is the only nationwide event of this type.

SSS has some unique features we would like to emphasize. First of all, everything is run in a very informal fashion. Apart from obvious organizational duties, there is no substantial difference between tutors and participants - the former volunteer their time and effort for free; in fact, tutors and organizers pay the same fee as participants. They really act as "slightly older friends who happen to know a bit more" rather than teachers in any formal sense. What matters is not age, but skill, expertise and willingness to share them - we've already had 16-year-olds giving courses on reverse engineering or Web security, with undergraduate students in the audience (and indeed many courses are attended by tutors and students alike). Everyone is free to propose ad hoc lectures and activities. The event is beneficial not only for participants, but for tutors as well. 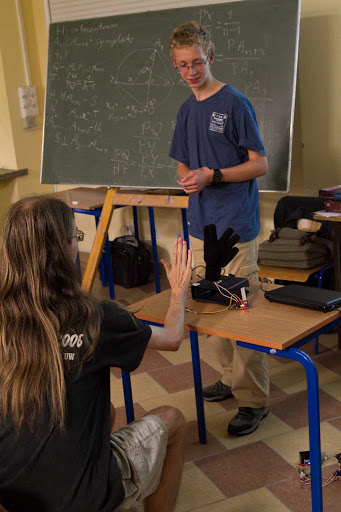 We hunt for participants who display extraordinary talent as well as genuine passion and curiosity. It’s important to note that high school grades are not a good indicator of those, and we never ask the candidates for their GPA or any recommendation letters. We base the decision on two components: qualifying problems and the cover letter. Qualifying problems, separate for each course, serve several tasks: assess the candidates’ skill and interest, prepare them for the course and give some idea of its content, while giving the tutors initial feedback on their competence. Cover letters help us recognize genuinely passionate people even if their qualification results are not outstanding. Pursuing personal projects or achievements in competitions are a plus. We perform a similar selection of the tutors, mainly on the basis of their course proposals.

Over the years, a community has developed around the workshop, with people involved as participants and then, one or two years later, levelling-up to tutors. Being a tutor is a demanding task, but can be highly rewarding - it’s a great pleasure when the participants enjoy and understand the challenging material you throw at them (and since they’re very smart, sometimes understand it even better than you). To quote one of the tutors: “When one kid learned about Curry-Howard isomorphism, he found it so awesome he almost had to be dragged away from the blackboard - this made my day!”.

Involvement in SSS has been extremely gratifying - and especially so because it started as a small one-shot event. If you told us in 2006 we'd be organizing a nationwide summer camp, most likely we wouldn’t have believed you. We think there are a couple of lessons that may be drawn from this success, which apply to organizing similar events, but also in more general situations when you're trying to bootstrap a new initiative.

With smart and motivated people, lots of things can be dealt with informally. As hinted above, our approach is very "lightweight" and yet seems to work out smoothly. Since as organizers we don’t have to follow any strict institutional guidelines or procedures, we can sort out any issues simply by discussion and brainstorming (obviously this approach doesn't scale up well, so this is partially a benefit of operating small-scale). We recommend taking a look at an interesting piece concerning hiring practices in Valve, the video game company famous for building Steam. Valve's attitude is very "people-oriented", as opposed to “process/workflow"-oriented stance found in big enterprise. They operate under the assumption that many of the formal procedures and hierarchies often serve the goal of "managing mediocrity" (preventing subpar employees from wreaking havoc), not fostering a creative environment. If you work with brilliant people, you can toss much of that away. At least from our small scale perspective, this certainly rings true.

There might be a lot of untapped potential out there. We've had a lot of involvement from people who otherwise might have not been able to indulge in teaching or sharing ideas, simply for lack of opportunity. As the example of SSS shows, sometimes following a good idea and not being afraid to experiment can bring you to surprising places. Moreover, we have heard from participants that they were surprised to find so many like-minded people, high school and university students alike. Otherwise they would have much fewer opportunities to develop their skills, share their passions and socialize (as opposed to being the only intellectual nerd in their high school).

It's better to work around the system than to fight it head on. People who struggle against the system (in this case, national education, but you can insert here any academic or political institution you don't like), or try to reform the system from the inside, often end up bitter and frustrated. Large institutions evolve at glacial speed, so whatever aspects one might want to reform, instead of fighting the resistance of matter it seems more fruitful to find a niche and expand from there. This approach seems applicable on a variety of scales, from micro (don't like courses your university offers - set up a seminar of your own) to macro. We’d have got nowhere if we simply complained about the Polish education system and stopped at that.

If you have any questions or remarks - we would love to hear them (e-mail us). If you are planning to organize a similar event (maybe in a different place, for different disciplines or for a slightly different group) - let us know!

Stay tuned for the second part, The Nuts & Bolts of SSS. We will describe the details of organizing the camp, in particular the admission process - this is more specific and technical, but we hope it will be useful for people wanting to organize something similar themselves. E-mail us and we will send you a beta version.

Take a look at some random photos from the Summer Scientific School. Images convey the flavor of the camp better than words! Many more photos are here.

Special thanks go to Karolina Sołtys, who initiated the idea of SSS, and Piotr Suwara, the current main coordinator. You can find the current organizing committee here.